It is a lot easier to attribute the cityscape when you think of parkour. The rails, the stairs, the ramps and the elevated structures easily became hotbeds for the nascent enthusiast. But how would you feel about parkour in the forest floor?

But before we head onto the climax, let’s start with the [not so] easy walk.

I have been hanging out with random hikers in Cebu and I could say that this group of people– put together to face the heights of Ormoc– makes a colourful weekend. Spearheaded by Shiela and Kevin, I along with Jovy, Idol, Ate Sherlyn and Paul were present from Team Bang. Meanwhile, Phil of Laag Bisaya led the pack with Chiara, Rell, Loche and Hardi. The nomads, on the other hand, were nothing short of dull with Shikienah, James, An Jurvel, and Shandy on the troupe.

Upon arriving at Ormoc City port, all 16 hikers from Cebu were geared with excitement for the major weekend escapade. After a quick breakfast and last-minute shopping for our trail and camping essentials, we set out on an hour-long drive to Brgy. Cabintan where we met our guides, Kuya Oheng, Kuya Danny, and Efren. Also joining the fun were two harkor hikers from Leyte, Dave and Ryan.

Lake Janagdan completes the Ormoc lake trilogy. Despite being the smallest of the three, it boasts of its towering 1120 MASL against the bigger Lake Danao (700 MASL) and Lake Kasudsuran (820 MASL). 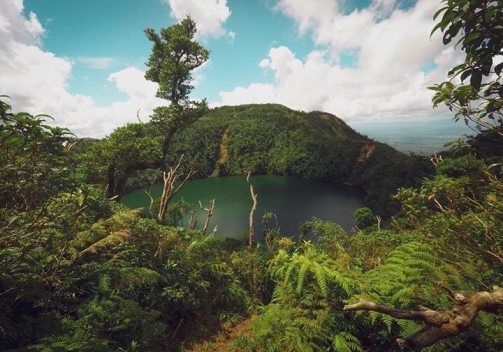 From the baranggay hall, we scrambled our way to the top against the roots, rocks, loose and slippery paths for almost three hours. 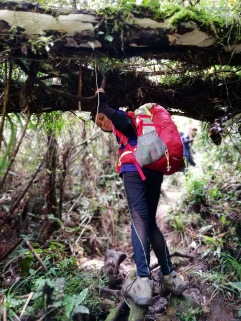 The sweat and screams of exhaustion were all worth it when we reached the crest for before our eyes rests the still water occupying the caldera of the dormant volcano, Mt. Janagdan. 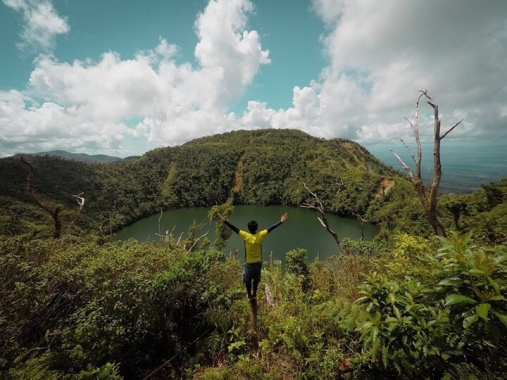 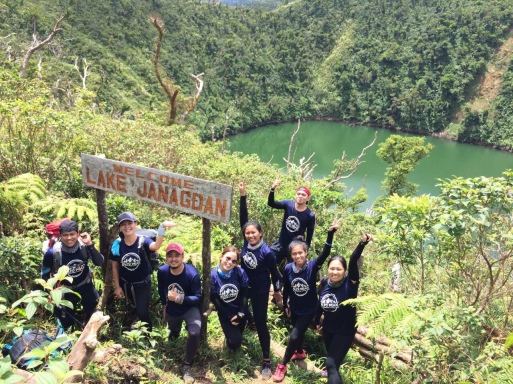 Everything worked perfectly well for us to feast on the gorgeous beauty nature has to offer. The sun was up with its might making the waters glimmer, the sky was blue, and the only thing you can hear is the duet of the singing birds and the rustling leaves. Personally, I think it’s a perfect place for me-time (and yes, date time).

It was perfect– or so we thought.

Halfway through our descent from the lake to the campsite, it started raining. We were skidding and sliding on the trails. Mother Nature must have known we needed a quick bath because when we reached the junction between Lake Janagdan, Alto Peak, and Sulfatara, the rain stopped. 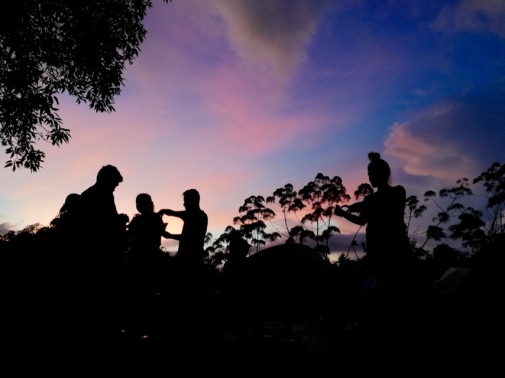 We’ve had a night filled with laughter, ‘hugots’ and ‘maoys’ but I’m glad we do not have a photo during those times of madness. What happens in Alto, stays in Alto. Haha! 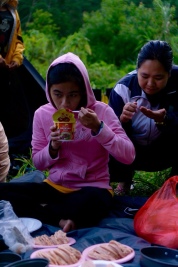 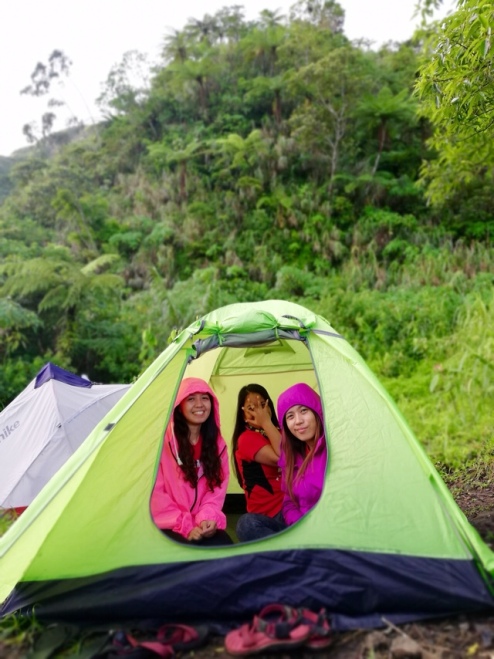 Alto Peak, also referred to as Mt. Aminduen, is the tallest highland in the entire Eastern Visayas with a difficulty scale of 6/9. With much anticipation to tick off the highlight of our adventure, the camp was alive at 5am and all set for the uphill battle at 7am.

As told by our guides to climb with extreme caution, we prepared our body, mind, and hearts for the unexpected.

Unlike most mountains with open spaces at the top, Alto Peak can only accommodate a few. Hence, as much as we want to climb altogether, we had to divide the group into two. First to ascend were my Team Bang friends with Dave and Ryan tagging along. Laag Bisaya and the nomads then followed.

The trek started with a 15-minute walk from the camp to the base of Alto Peak. Our guide, Kuya Oheng, warned us to be extra careful in our steps because the trail can be unpredictable. This, according to him, is what they call as the “monkey trail” which offers nothing but a 2-3 hours ascent. As the name suggests, the only way to climb was to crawl on fours holding onto rocks and roots, leap over huge tree trunks and balance on some. At some point we were holding onto a rope, clambering an 80 degree slope. FUN doesn’t suffice to describe it. The whole experience was heart pounding and breathlessly satisfying.

I’m a sympathizer. I easily take in emotions and make it into my own. This is one reason why I prefer the front whenever we hike– to avoid drawing in tired energies. And trudging the trails next to Kuya Oheng was one of best. The man never ran out of energy. He will talk you through it, making you forget about rest. The next thing you’d know, you’ve reached the top. 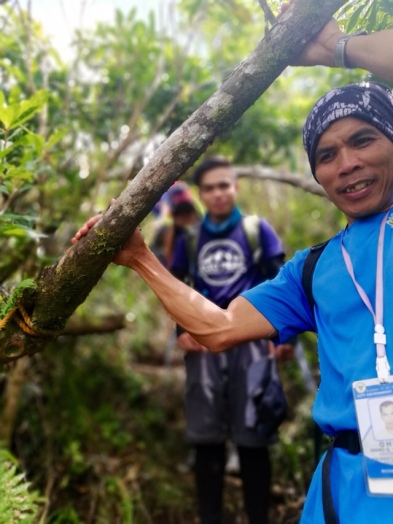 Ahead of us were three hike beasts. These three were beastly fast that what supposed to be a three-hour climb was cut down to 1 hour and 13 mins. How? Don’t ask me, ask them. 🤔 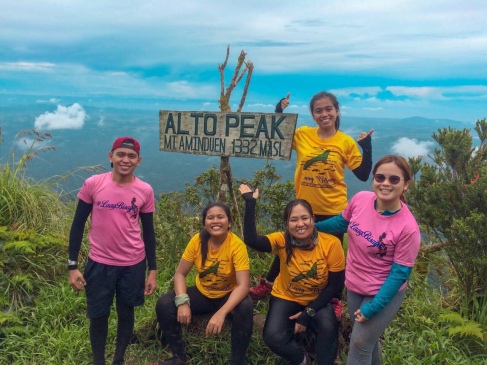 Going back to the campsite, one needs to trace back the trails. YAY! Another “monkey trail” experience! ❤ This, my friends, is where our ultimate jungle parkour begins. Our harkor trio wanted to beat the record of the 30-min descent from the summit and, though unsure, I also took the challenge. I have been a fan of parkour since college days. It always amaze me how playful and spontaneous and creative they improvise those moves. Now is the time to put it into action.

Idol, Dave and Ryan will definitely make Belle, Vigroux, and Hnautra proud. While we were jumping, skidding, and slidding, these three were running a hundred miles per hour. Leaping like free runners as if forest was one big playground. The three-hour climb was again cut down 35 amazing minutes! 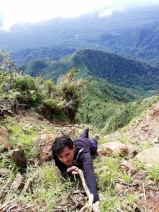 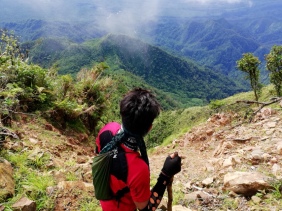 Effing crazy! But someone’s crazier enough to beat the trio with the all-time high 31 minutes. Who else but Laag Bisaya himself, Phil! 😍

Don’t get the wrong idea. This climb isn’t about who’s the fastest or the slowest but about  the experience we make along the trails. Our weekend in Ormoc is a major experience which played a major role in making us braver hikers. It was a weekend  of freeing from one’s fears, of stripping away doubts and returning to an innate effortless natural instinct. Not only did we make memories but we make greater friendship. ❤ 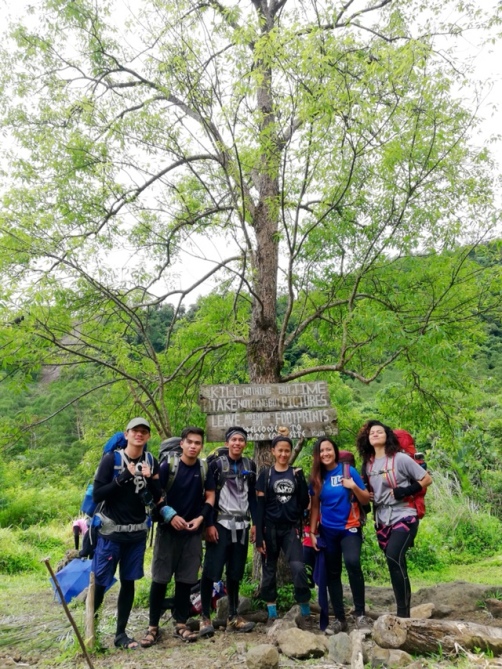