Young Dumb and Broke: A trek from Mt. Manunggal to Mt. Mauyog

Jane Austen once wrote, “What are men to rocks and mountains?”

Just recently, my escapade with the adventure-seeking squad echoed this very line as we faced the rocks and mountains of Mt. Manunggal and Mt. Mauyog head on. These are two of the most famous peaks here in Cebu that are often hiked by beginners and seasoned mountaineers alike. And we don’t want to miss that, do we?

We started with a foggy greeting. On our way to Balamban, we were welcomed with a misty surrounding that almost felt like entering a world of miasma. Most of us were worried that we won’t get a chance to see the panoramic view atop but gladly Mr. Sun was kind enough to smile upon us.

From the junction of Brgy. Sunog, we said our prayers and started our trek. I should add here that before anyone can proceed with the adventure, you will have to register and pay various fees. I’m not going to elaborate, though, how we ended up broke but I suggest you bring extra money.

Moving along… It was quite a long walk but a fun one. Thanks to Marc and his Mi Gente, we spend the day with this song in our heads. We even danced uphill but we were badly choreographed. Should we do better next time? Yes, please!! 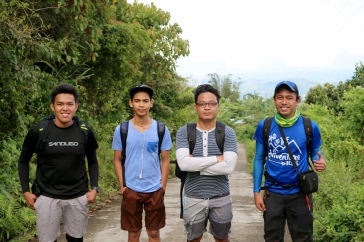 The trail to the campsite of Mt. Manunggal is lined with agoho trees which are often mistaken for pine tree. And Shiela wouldn’t want to miss this!

Aside from its 1,097 meters above sea level of grandiose, Mt. Manunggal also made its way into the list of the most historical places in the Philippines being the crash site of the late President Ramon Magsaysay. Magsaysay’s presidency was dubbed as the “Golden Years”. He was known for his humility and kindness which earned him the moniker, “The People’s Idol.”

As for Team Bang, we also have our very own “idol” with us. A very close resemblance, we’d say, since he’s one of the kind and humble trekkers there is.

To the seasoned mountaineers, Mt. Manunggal lacks the grueling trail despite being the highest peak in Cebu. It involves walking on cemented footpaths which turns to mud and rock as you progress. The trail is a winding ascent and descent in a jungle of lush bushes—but not that steep. The real challenge, I’d say, lies on the last part of the trail with its narrow and sharp rocks. There are also stingy foliages that you need to be cautious on holding on to.

The reward that awaits is priceless. The peak has an exquisite rock formation at its pristine form. We had to jump through the boulders, leaped and hugged some enormous stones. Lo and behold, the green glory of Balamban!

One of the highlights when you go to Mt. Manunggal is getting on top of the protruding monolith. 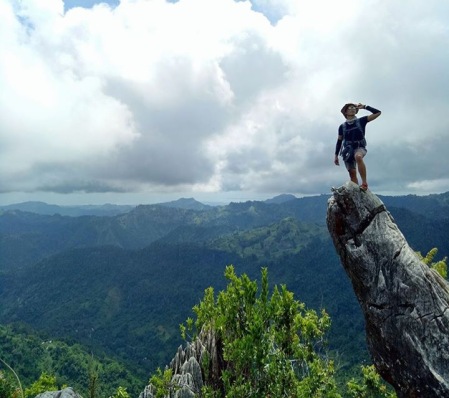 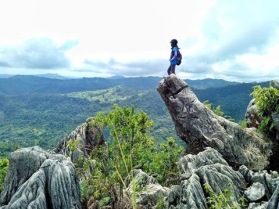 But while all of us were brave enough to stand on its crest, three men were just certified daredevils with their stunts! 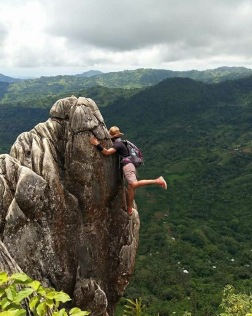 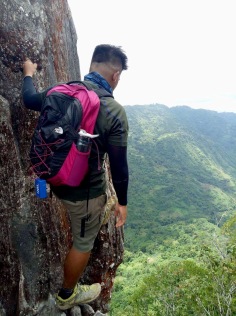 And, oh, have I told you? Just like my previous adventure, I brought another favorite book with me too. This time its Eleven Minutes by Paulo Coelho. 😀 I even encouraged a fellow bookworm bring his own. Haha. A book club in the mountains? Not bad! 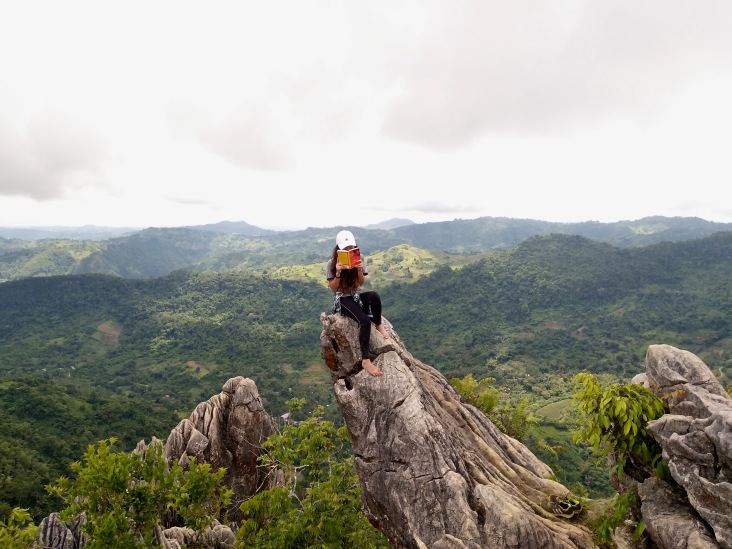 For a first timer, Mt. Mauyog came as a shock to me. Compared to Mt. Manunggal, I find its trails arduous for one reason: the assault. We were scaling with all our limbs until we’re breathless.

While fairly easy during a good weather, this is quite treacherous due to the slippery tracks from last night’s rain. We had to gingerly hold on to the branches to retain our balance and to avoid tumbling down the cliff. The fun (if not so embarrassing) part was most of us ended up climbing on fours. Yes, just like our four-legged friend who came with us, we fought our way through sharp blades of grass, thorny branches, and slippery path crawling. Surprisingly, this kind of trail pumps more adrenaline and personally, I am thankful to have my dance and badminton training up my sleeves which helped me survived the trek. 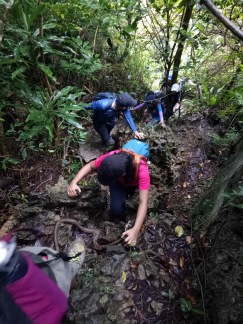 By the time we reached the top, I was a trembling mess. I was too tired to take a lot of solo. The peak has a gorgeous limestone promontory that looked like a huge brain-like brae. This is not for the faint-hearted and those with fear of heights though. One wrong move could mean goodbye. 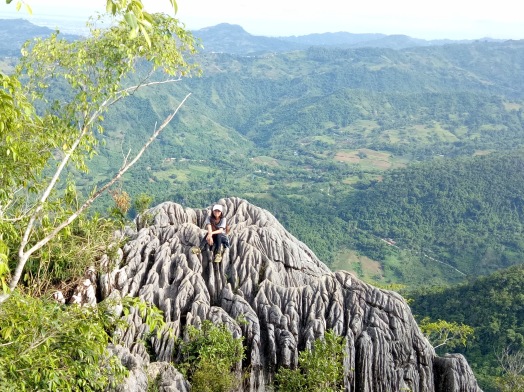 We did get tons of group pictures here, thanks to Sir Juan. And just how true friends should be, we didn’t forget to include Cherwinn in our photos. Even in spirit, the lovely “gracefool wanderer” will always be with us. HAHA~! Another lesson learned: Thou shall not be absent. 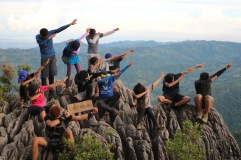 Yes, we were young dumb kid-at-heart to think we’d conquer the mountains. Truth is the mountain conquers us. Always will. Here’s to being young dumb (and hopefully not broke the next time). 🙂

I’m so high at the moment
I’m so caught up in this
Yeah, we’re just young, dumb and broke
But we still got love to give

9 thoughts on “Young Dumb and Broke: A trek from Mt. Manunggal to Mt. Mauyog”